This short blog is by way of a tribute to Paul Whitfield, some of whose collection of post war art graces our current Mid Century Romanticism exhibition. Paul, who sadly died in May 2018, was the son of the poet and writer Christopher Whitfield, an early friend of Michael Cardew in the 1920s, and subsequent stalwart supporter of the romantic artist and etcher F L Griggs, like Christopher a Chipping Campden resident.

The Whitfield family’s background was in industry, but Paul was to follow in his father’s footsteps in actively garnering a lovely collection of art and artefacts. His senior management role at the top four London auction houses was clearly a significant factor in assisting his hobby, however his unerring aesthetic sense and eye for quality and beauty were equally as important.

His auctioneering career had started with Christies in 1965, working in a variety of fields including furniture, carpets, bronzes, sculpture and a wide range of decorative objects. At Christies where he was ultimately Managing Director, he was most notably responsible in establishing their South Kensington rooms.  He worked subsequently for Bonhams, Sothebys and Phillips, employing an encyclopedial appreciation of the beautiful, also reflected in his own collections of art and objects.

Our paths crossed relatively recently around three or four years ago, in collaborations on two exhibitions at our Archive Trust of Neo-Romantic etchings of the 19th and early 20th centuries. We had planned to subsequently put together a Neo-Romantic art show at Court Barn Museum, to illustrate what became of the Romantic taste in art after WW2. His untimely passing led me to curate our current show as a small tribute to his urbane and erudite taste, and to celebrate a kind and generous man whom I admired greatly.

We will be giving priority to prebooked appointments from our long standing supporters but also welcome new visitors to the Archive Trust here in Winchcombe subject to some advance notice on the day.  Please : telephone 01242 602 319 ; text 07791 782 243 ; or email  johnedgeler@gmail.com   to book an appointment

All visitors will be asked to use hand sanitiser on entry

The curator will wear a face mask as required

Only single household groups at any one time please 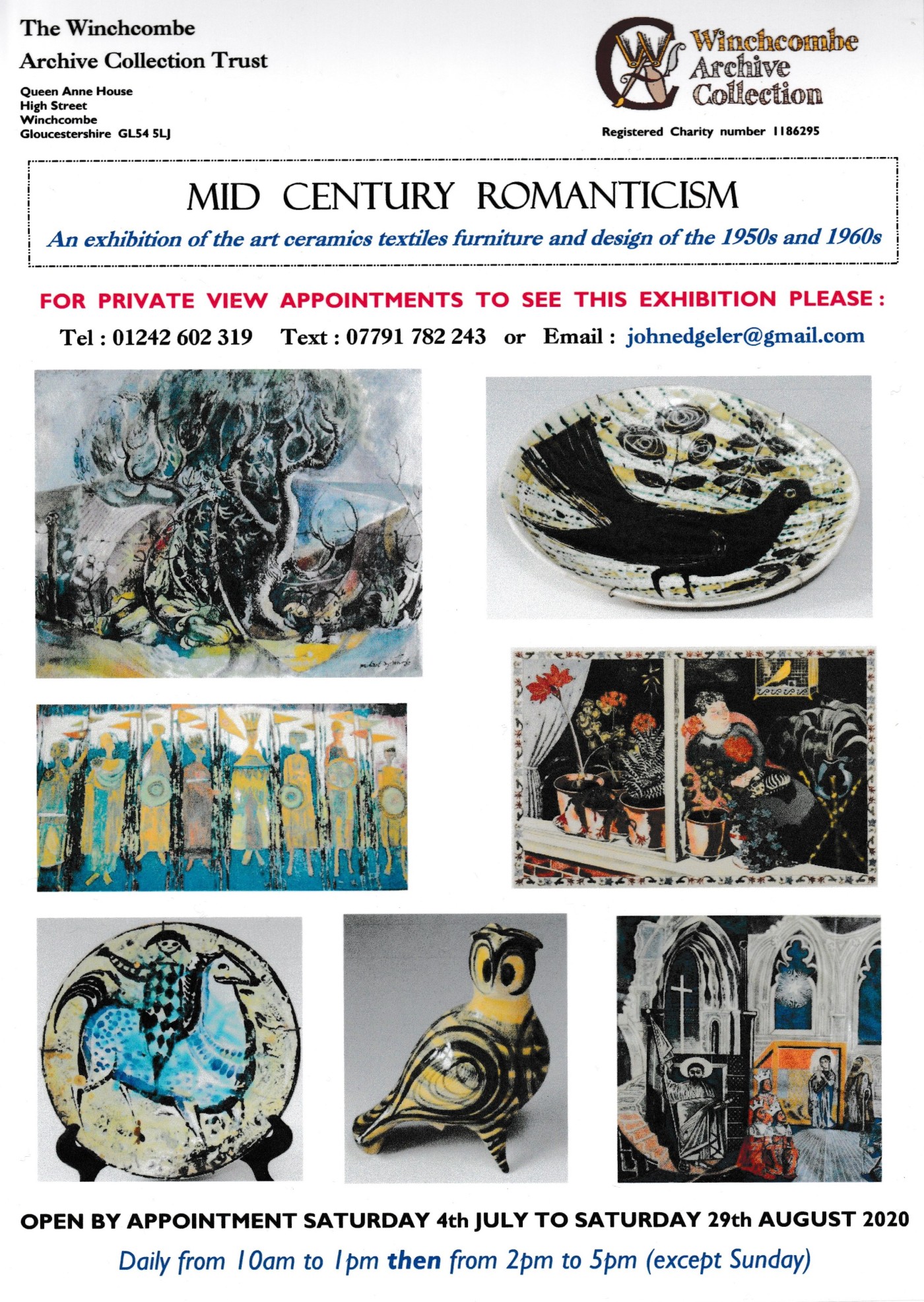 A Cotswolds Spring in Photographs

During the current lockdown I have been revelling in  a particularly glorious spring here in Winchcombe.  A selection of images are available through clicking on this pdf link:

A Cotswolds Spring in Photographs

Sitting on a contemporary Danish teak tray, this small group of tableware and cutlery are typical of Scandi homewares very popular here in the 1960s. The stonewares were made the Finnish firm Arabia and are in their Ruska design, whilst the cutlery is by the Swedish company Gense and are from their Focus De Luxe range originally designed by Folke Arstrom in 1955.

Ruska made a full range of tablewares for the breakfast, tea and dining table. When originally sold, they were fairly expensively priced and I recall buying pieces for my eldest sister’s wedding in 1968 – I couldnt afford many! Ironically, a generation on, sets frequently turn up modestly priced in charity shops – as did our own. Gense were and remain top quality makers, their Focus De Luxe range proving award winning, and indeed was named a design classic of the period by a leading US newspaper.

They both display well with Danish made teak wood wares, this condiments set with smoked glass oil and vinegar containers and mixing bowl being a good quality example. Russells were not the only UK manufacturer to be influenced by Scandi design: the electric mantelpiece clock below made by Smiths is a classic example. 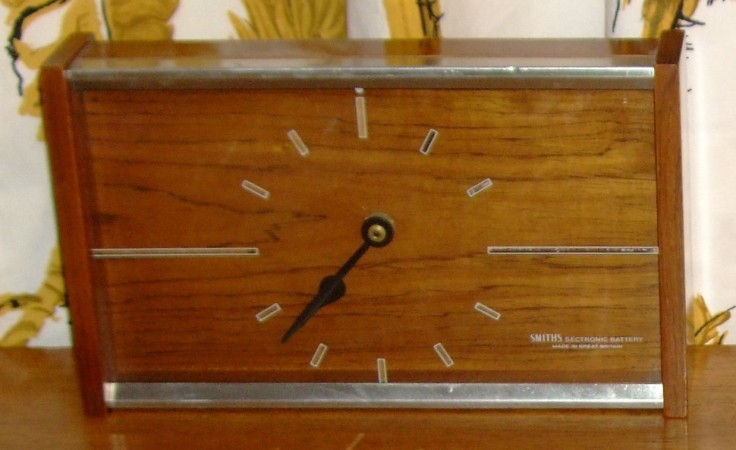 The image above of a Danish condiments set paired with a 1960s Smiths clock sitting on a Gordon Russell of Broadway sideboard in teak, laurel and beech encapsulates well one of the significant themes of our 2020 show. Set against a period Heal’s Teazel curtain designed by Jane Daniels, the group exemplifies the popularity and impact of Scandi style in the British interiors scene of the 50s and 60s.

As a general rule, Scandinavia did not go through as pervasive a period of industrialised manufacture as the UK in the 19th century, and traditions of hand making and original craft infused design remained strong there into the 20th century. Additionally, whilst parts were badly affected by the Nazi scourge, modern movement design in craft quality making remained proactive in the 50s at a time when our own homeland was still gripped by rationing and post WW2 rebuilding.

For whatever reason, fresh looking, stylish and quality made Scandi interior furnishings became very popular in Britain, establishing a trend that influenced the production of traditional furniture firms like Russells and Gibbs. This may be evidenced by the photos of a 60s Gordon Russell sideboard (above) and chest of drawers (below), the latter paired with John Piper’s Stones of Bath. 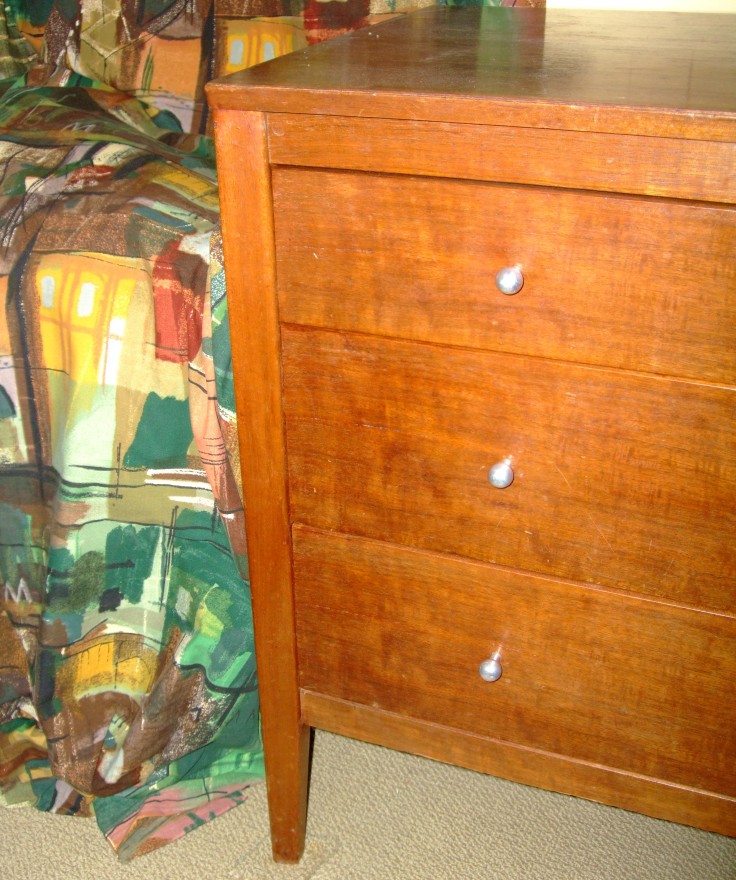 The work of post WW2 Devon based textile designer Susan Bosence also features in our 2020 displays. I became aware of Bosence through working with the family of Robin and Heather Tanner, as Heather used her fabrics both for curtaining at their family home, Old Chapel Field, and in Heather’s own clothes (Jagged Stripe below).

The Tanner connection is partly through the Painswick based 1930s textile designers Barron and Larcher. B&L were notable for their use of hand carved woodblocks for printing on materials, with at times quite elaborate designs employing many natural dye stuffs.

Bosence knew Phyllis Baron personally immediately after WW2, and was influenced by her in her continued use of similar organic colours. However her designs were somewhat simpler in style, with plain repeat motifs and a restrained range of colours. Bosence taught at Dartington, Fanham and Camberwell in the 1970s, producing an important technical title, Hand Block Printing and Resist Dyeing in 1985.

The artist John Piper whose Stones of Bath textile will be displayed in our 2020 show was interesting for his transition from the creator of individual works to art and design intended for reproduction, working in tandem with industry. His prints, often featuring architectural detail, are perhaps better known than his work for large textile firms such as Arthur Sanderson (above) and David Whitehead (below).

Work for Sandersons often featured in a series of different colourways, a reflection of their use in a variety of interiors. Some additionally had an almost architectural detail in their design, notably Arundel (below) which has a distinctive look akin to stained glass windows.

Piper’s fabric designs, whilst only a form of reproduction, have become collectable in their own right. This a reflection of the production values of the companies with whom he worked, although the condition and size of the material and the rarity of a particular design are inevitably considerations.

Another overseas artist designer to feature in our Summer exhibition, Tibor Reich was a Hungarian jewish refugee who came to England to escape Nazi persecution. Reich worked initially in Haute Couture although wartime rationing led him to transfer his skills to interior textiles that were not so restricted.

Settling ultimately in the outskirts of Stratford on Avon just after WW2, Reich subsequently attracted high profile commissions to design for the Festival of Britain (1951), Coventry Cathedral (1960) and subsequently the Royal Shakespeare Company in Stratford (1964). He was one of a group of designers that helped transform the interior aesthetics in British homes, featuring a new and radiant use of colour.

His textiles are particularly distinctive, featuring ‘deep texture’ materials and a rich, almost impasto technique of colour printing, which reflected the method of weaving of the materials employed . He also designed for industry, notably his Tigo-ware developed in tandem with Bournes of Denby.

winchcombearchivecollection
Create a free website or blog at WordPress.com.